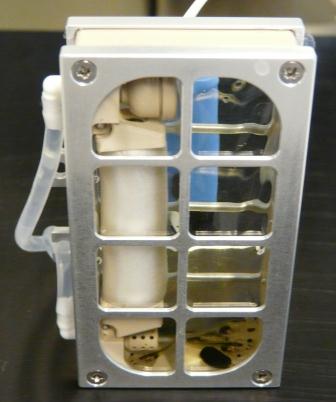 XENOPUS experiment: Aim of the experiment is to characterize the effect of microgravity on the vestibuloocular (VBO) system in Xenopus laevis tadpoles at late development stages. In detail are investigated: a) the critical period in the developing of the vestibuloocular reflex (rVOR); b) the relations between oculomotor and spinal motor μg-sensitivities (freely swimming); c) the correlation of tail lordosis with rVOR modifications.

Hardware performance: XENOPUS HW guarantees a balanced environment for small sized metazoan such as Xenopous laevis tadpoles; food,water and gas exchange are indeed provided. The XENOPUS hardware contains eight aquaria so that eight independent experiments can be carried out at the same time. Each of them is provided with its own fluidic system. Each aquarium can host up to ten Xenopous laevis tadpoles and the fluidic system guarantees water exchange and filtering.