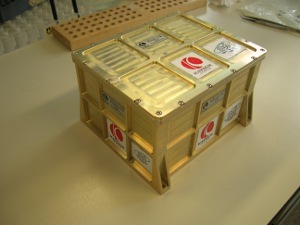 BIOKON Container: In the framework of the Life Science programs Kayser Italia has developed the autonomous container BIOKON. This development has been driven by the need to adopt a “standard” container, limited in size and weight, and easy to accommodate in free volumes of the spacecraft.

BIOKON aim: BIOKON provides a dedicated environment for the execution of life science experiments in microgravity. BIOKON complements effectively all types of biological Experiment Units (EU) regardless the fact that they could require electrical power or not.

EU Powering: The BIOKON can operate in a twofold manner:
• as passive container in the case the experiment does not need external power supply (i.e. not powered EU, or EU powered by battery pack inside the BIOKON).
• providing power supply by an external battery pack (e.g. accommodated in another BIOKON) or directly supplied by the spacecraft through an electric interface.

BIOKON performances: The external interface of the BIOKON toward the FOTON capsule has been defined in agreement with Russian authorities. BIOKON has been qualified for hard mounted launch with Soyuz launcher into FOTON capsule, for a 3 kg total mass (1 kg for the BIOKON itself and 2 kg for the internal hardware). This mass limit can be exceeded in case of soft stowed launch. BIOKON could be provided in sealed (max 1 bar differential pressure) or vented version. BIOKON (in both sealed and vented versions) can withstand pressurization/de-pressurization environment specified for Soyuz, Foton, International Space Station (ISS), Shuttle Transportation System (STS).