The Electro-Magnetic Levitator (EML) is a multi-user facility for material science research onboard the International Space Station (ISS). EML will allow the scientific users to perform a variety of studies with scientific samples in a container-less environment w.r.t. research in the field of meta-stable states and phases as well as measurement of thermo-physical properties. All experiments will be observed by dedicated video cameras. 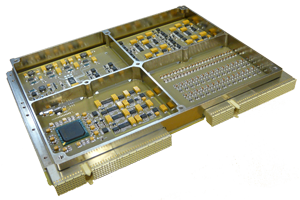 In the frame of EML-ECE, Kayser Italia has developed some compact-PCI data acquisition boards both analog and digital. The boards are accommodated in 6U standard c-PCI modules provided of an aluminum frame designed to cool the electronics by conduction. The boards are fully compliant to cPCI standard and can be used also on board commercial mainframes.

EML-ECE included also some Power Distribution Module (PDM) able to route controlled and protected 28VDC to other facility consumers. PDM include onboard special valve/solenoid drivers specifically developed to reduce the overall power consumption. The module is provided of autonomous internal power supply and communicates (HK data and command) via an isolated serial interface. Hardware safety inhibits and controls are also implemented. The PDM is composed by a 6U VME module provided of an aluminum frame designed to cool the electronics by conduction.

In addition, Kayser Italia has developed a special Stepper Motor Controller module (SMC) able to drive up to five different stepper motors. The module is fully configurable via a serial interface allowing the user to select the motor peak current and many other parameters about motor control. That approach reduces the effort of main processor because all driving system is locally controlled by SCM module. The SMC is composed by a 6U VME module provided of an aluminum frame designed to cool the electronics by conduction.